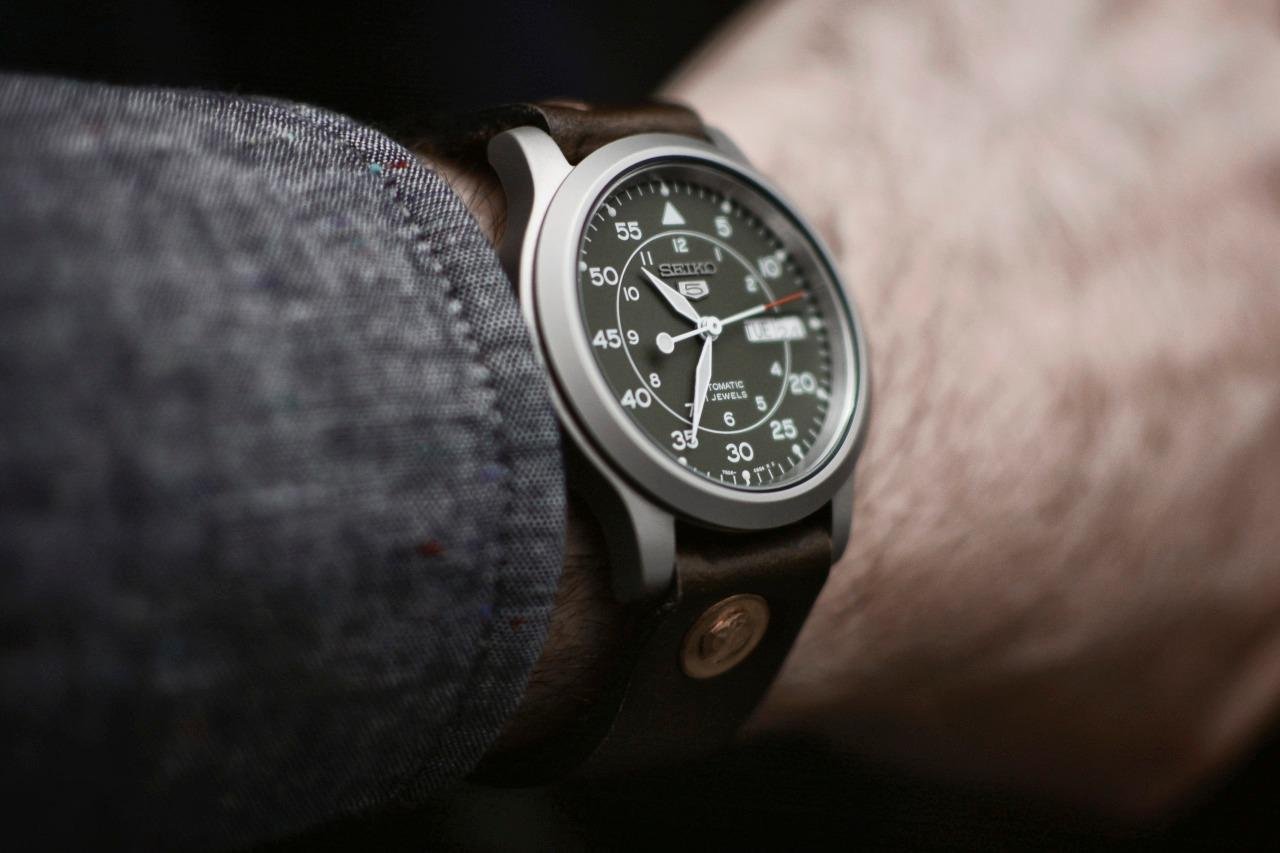 Where I live, many people will buy a “winter beater” car for use in the harsh winter months. Leaving their nicer vehicles in the garage, where they are not subject to all those winter unpleasantries: road salt, potential accidents, and low temperatures. The same principle applies to beaters watches: Save your nice pieces for special occasions, wear the beater daily and/or anytime the watch is likely to get banged up.

Dependable, tough, and inexpensive are the main criteria we look for in beaters. We decided to cap this list at $100, but still managed to find plenty of great watches to choose from; take a look to find the perfect beater watch for you. 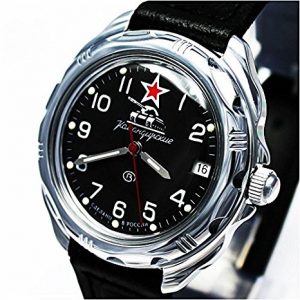 Our first watch not only perfectly embodies the definition of a beater, but it also comes with a bit of history. First released in 1965, the Komandirskie (Russian for “commander”) is a military style watch created by Vostok, the company that served as the official watchmaker of the Soviet Union’s defense department. These watches are designed to withstand intense abuse and keep ticking, exactly what you want in a beater watch. The fact that it currently sells for around $60 makes this is an exceptional bargain.

The Komandirskie’s case has seen a variety of designs over the years, with the current iteration featuring a polished bezel that incorporates 6 intermittent triple hashmarks. The stainless-steel case measures 40 millimeters wide by 12 mm thick and features a grandiose Russian imperial eagle stamped on the case back, definitely not your run-of-the-mill Japanese or Swiss logo.

The Komandirskie’s dial uses a straightforward design with a couple Soviet-style flourishes. The black dial features unpretentious white Arabic numeral hour markers, except for the red star in place of the 12 o’clock numeral and a small, simple date window instead of the 3. Under the red star sits an imposing tank taking aim at 10:30, giving this variation its “tank dial” nickname. Small patches of lume adorn the hour and minute hands, as well as the hour markers.

Vostok uses an in-house hand-winding mechanical movement with 17 jewels. Once fully wound, the watch should last about 36 hours before needing a new winding, but figure on winding it once a day to be safe. Of course, the movement contains a shock-resistant balance. 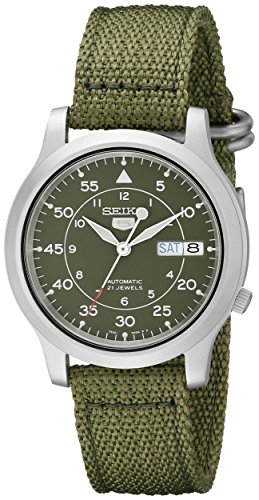 Another military design, Seiko’s SNK805 is a green machine from the celebrated Seiko 5 line of high quality, affordable automatic watches. Coming in at well under $100, this watch represents another fantastic value.

The case is water resistant to 30 meters, which might not hold up to some people’s standards for a beater as it is unsuitable for swimming. At 35 millimeters wide by 11 millimeters thick, this is a relatively small watch, which means it should be lightweight and unobtrusive for the wearer, a great thing when considering a daily wearer/beater watch. The case back features a nice large viewing window so that you can observe the automatic movement’s operation.

Included with the SNK805 is a green nylon strap that tends to get mixed reviews from owners. The quality and craftsmanship on this band really doesn’t seem to hold up to that of the watch itself, so this Seiko could also be a great candidate for a NATO strap swap-out. The strap measures 18 millimeters wide and uses a traditional buckle closure.

A mineral dial protects the dark olive-green dial, which uses an aviator-style layout. The minutes are displayed as the large, outermost numerals, with the smaller hour markers sitting just inside the line that separates the two numerals. An upwards-pointing arrow sits in place of the 60-minute numeral, a common feature on pilot’s watches. Wonderfully bright lume fills the interior of the hour and minute hands, the ball at the end of the second hand, and the dots above each hour marker. This watch can be used well into the night, an important feature on your beater watch.

Like most Seiko 5s, the SNK805 uses the tried-and-true 7S26 automatic movement. A day and date feature is the only complication on this model. With 21 jewels incorporated into the design, the 7S26 is known as an extremely reliable and accurate movement, considering its price. 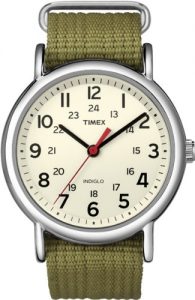 The Timex Weekender has the distinction of being the cheapest beater watch on our list. Coming in at well under $50 for most variations, this is a great looking unisex watch that is so cheap you don’t have to worry about the scuffs and bumps that come with everyday use. Oh, and don’t let the “Weekender” name fool you, as this is a perfect everyday watch.

The polished silver-tone case epitomizes an uncomplicated design, with a round, stationary bezel and a small crown at 3 o’clock. Measuring in at 38 millimeters wide and 9 millimeters thick, this watch is a reasonable size for both men and women, as long as you aren’t looking for a super dainty or oversized dial. Like the Seiko, this Timex is water resistant to 30 meters, so anything more than a splash could end up causing damage, a potential deal breaker for some shoppers.

Like the case, the cream, black-, or white-colored dial uses an extremely straightforward design, with no day or date functions. In fact, the only real embellishment on the dial is the 24-hour numerals situated inside of the large 12-hour Arabic numerals. The Weekender uses Timex’s ubiquitous Indiglo to light up the entire dial in the dark, making it incredibly easy to read in the dark. Three simple hands measure the hours, minutes, and seconds; nothing fancy here, just a nice, modest design. In fact, the dial is so clean and elegant in its simplicity that most observers unfamiliar with the watch will probably assume the it costs several times more than it does.

Timex offers the Weekender in a variety of strap colors and designs, enough to match just about any taste. As you would expect at this price, the watch uses a battery-powered quartz movement. 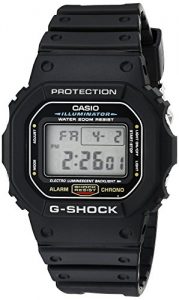 The first Casio G-Shock hit the scene in 1983, designed to be as rugged as it looked. The G-Shock range became hugely popular with people seeking the most hardcore watches out there, at a reasonable price. Casio has developed the line into literally hundreds of models, some looking like something you might expect a futuristic robot soldier to wear. The G-Shock classic, however, has stayed true to the original design, with some added toughness for good measure. All in all, this may be one of the best money-for-durability values on the market, making for a great daily beater candidate.

We don’t review too many watches that use a digital display here at the Watch Review Blog, but the G-Shock’s 80s-style display works great with its old school square case. The day is shown in the top left while the date is displayed in the top right corner (usually – more on that later). Use the silver “mode” button on the bottom left corner of the case to switch between some of the functions offered by the watch’s battery-powered quartz movement. There’s a timer and stopwatch function, in addition to the standard time display. Note that, when using the timer and stopwatch features, the date disappears from its place in the top right corner, with the current time now displayed in its place. An Indiglo-style backlight is operated by the bottom right button.

Water resistant to 200 meters, this G-Shock could work perfectly well as a dive watch as well as a cheap beater. At 45 millimeters wide by 15 thick, the resin case is fairly large, but because of the small dial window, it doesn’t look as big as those measurements suggest once it’s on your wrist. There is plenty of text on the bezel and the black screen surrounding the dial; from the make and model to the functions of each of the 4 buttons, to the specs of the watch. This all gives the G-Shock what I call a “retro-sporty” look. 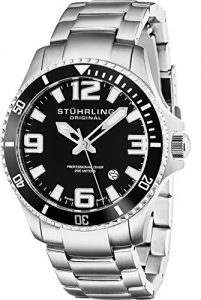 Stuhrling’s Aquadiver Regatta is a feature-laden dive watch offered at a very reasonable price. Speaking of its price, you might notice that Stuhrling lists the MSRP at $595: I am not sure why they list such a high asking price, but rest assured that most retailers offer the watch at just below $100, so this watch fits our criteria for this list.

The 42-millimeter stainless steel case is water resistant to 200 meters. One nice feature not normally seen at this price point is a screw-down crown, which prevents the crown from being accidentally pulled out while underwater. The white-on-black unidirectional bezel matches the dial’s color scheme and allows the wearer to track time in 10-minute intervals, with the first 15 minutes displaying extra hashes to emphasize the traditional decompression intervals.

The piano black dial is covered by a Krysterna Crystal, a material that is more scratch-resistant than mineral and more shatter-proof than sapphire. A large and legible, modern-style font is used for the 12, 3, 6, and 9 o’clock hour markers, while the remainder of the hours use index markers. All of the hour markers are filled with lume, as are the hour and minute hands, making this watch as easy to read at night as during the day, at least for as long as the lume stays glowing. A small, circular date window is hiding between the 4 and 5 o’clock markers, so obscure that it escaped my notice the first few times I looked at the dial.

Even though Sturhling is an American company, it uses a Swiss quartz movement in the Aquadiver, a fact proudly stated on the dial by the 6 o’clock marker. The Aquadiver comes with a 22 millimeter wide stainless-steel bracelet with a fold over clasp.

Cody appreciates watches for the way style and utility intertwine in a very similar fashion to automobiles, creating an emotional allure that few other items can match.