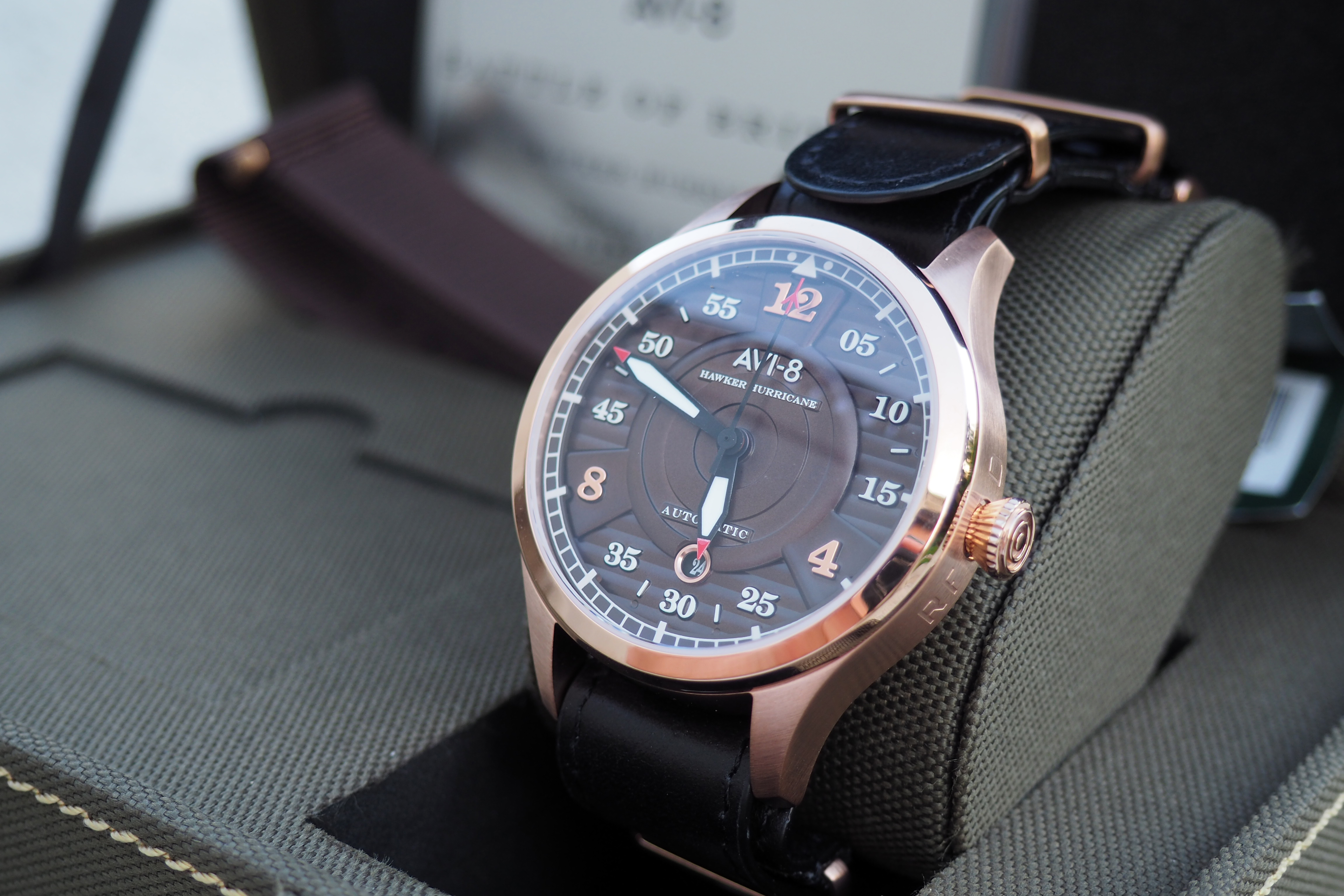 Every time you put on an AVI-8 watch, you’re wearing a story, a piece of history. Their aviation-inspired watches honor military pilots and the planes they fly. The Hawker Hurricane AV-4046-02 is no different.

A special-edition watch with a backstory

The ideas for AVI-8 watches aren’t simply plucked from thin air—no pun intended. Each one pays tribute to a particular aircraft, whether modern or historical. The Hawker Hurricane was a British warplane, and AVI-8 has released several variations on a Hawker Hurricane watch. The AV-4046-02 is a special “Battle of Britain” edition commemorating the pivotal air battle that changed the course of the Second World War. 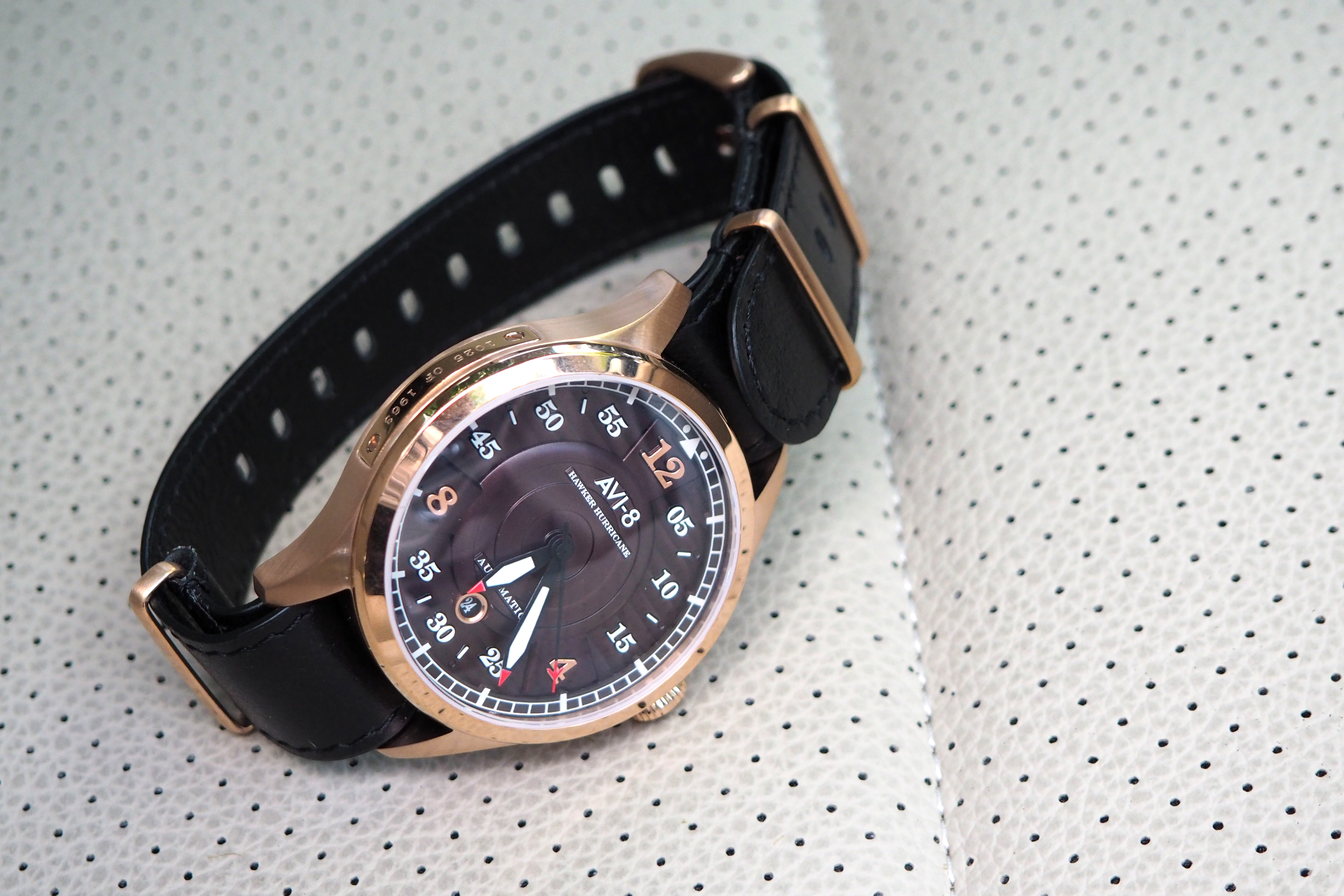 The AV-4046-02 is 43 mm in diameter, 12 mm thick, and about 52 mm lug-to-lug. The stainless steel case has a rose gold finish, and it’s a gorgeous marriage of curves and angles. The lugs and sides of the case have a brushed finish, while the bezel is polished to a shine. The dial window is slightly domed sapphire crystal. 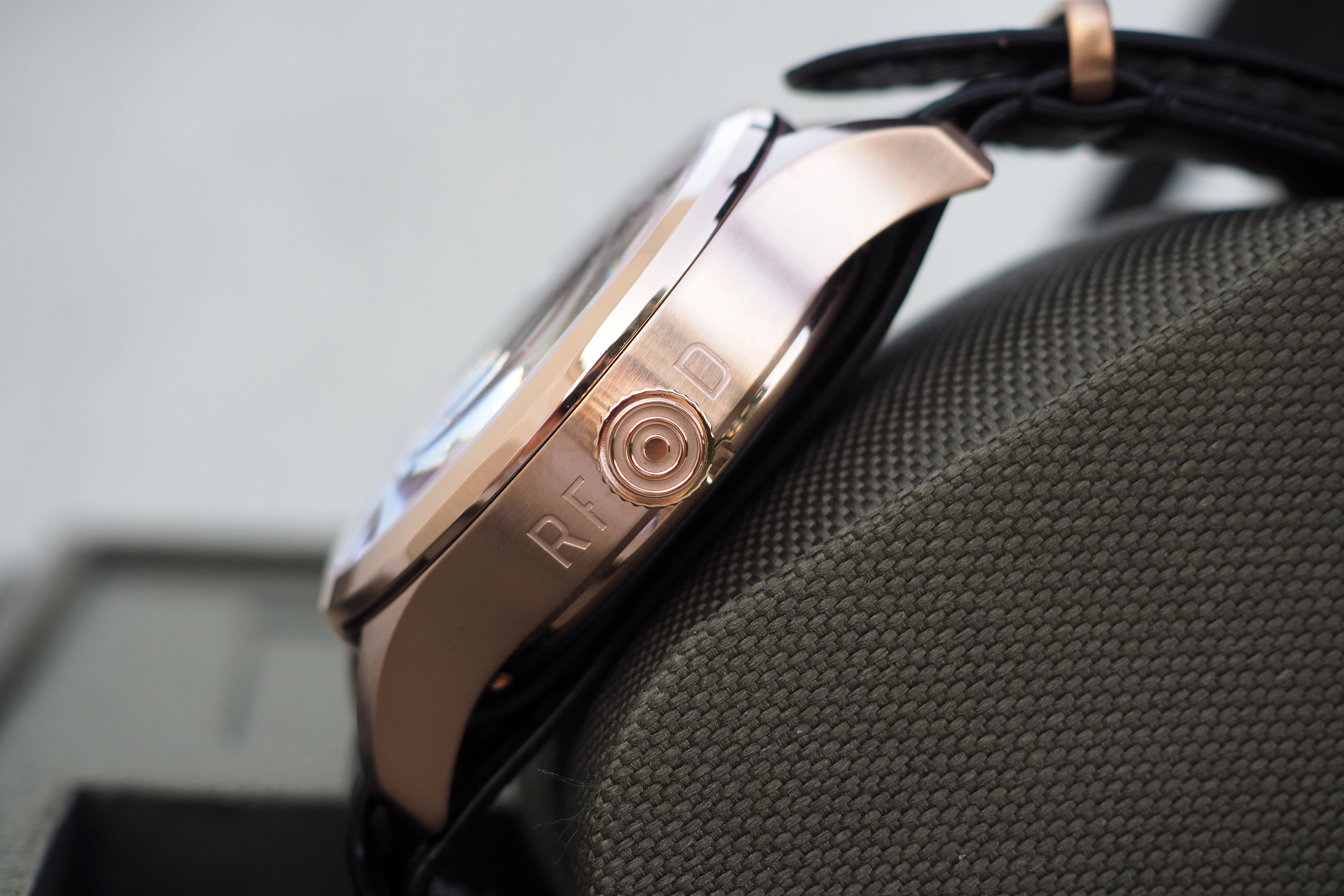 Even the sides of the case are worth your notice. On one side is a small plate engraved with the individual serial number (0244 of 1963, for instance). On the other side you’ll find the flared, coin-edge crown with an engraved roundel—the “bullseye” shape commonly seen on aircraft of the RAF. This side of the case is also engraved with the legend “RF D,” which was the code for a Polish squadron that assisted in the Battle of Britain, destroying more German planes than any other unit. 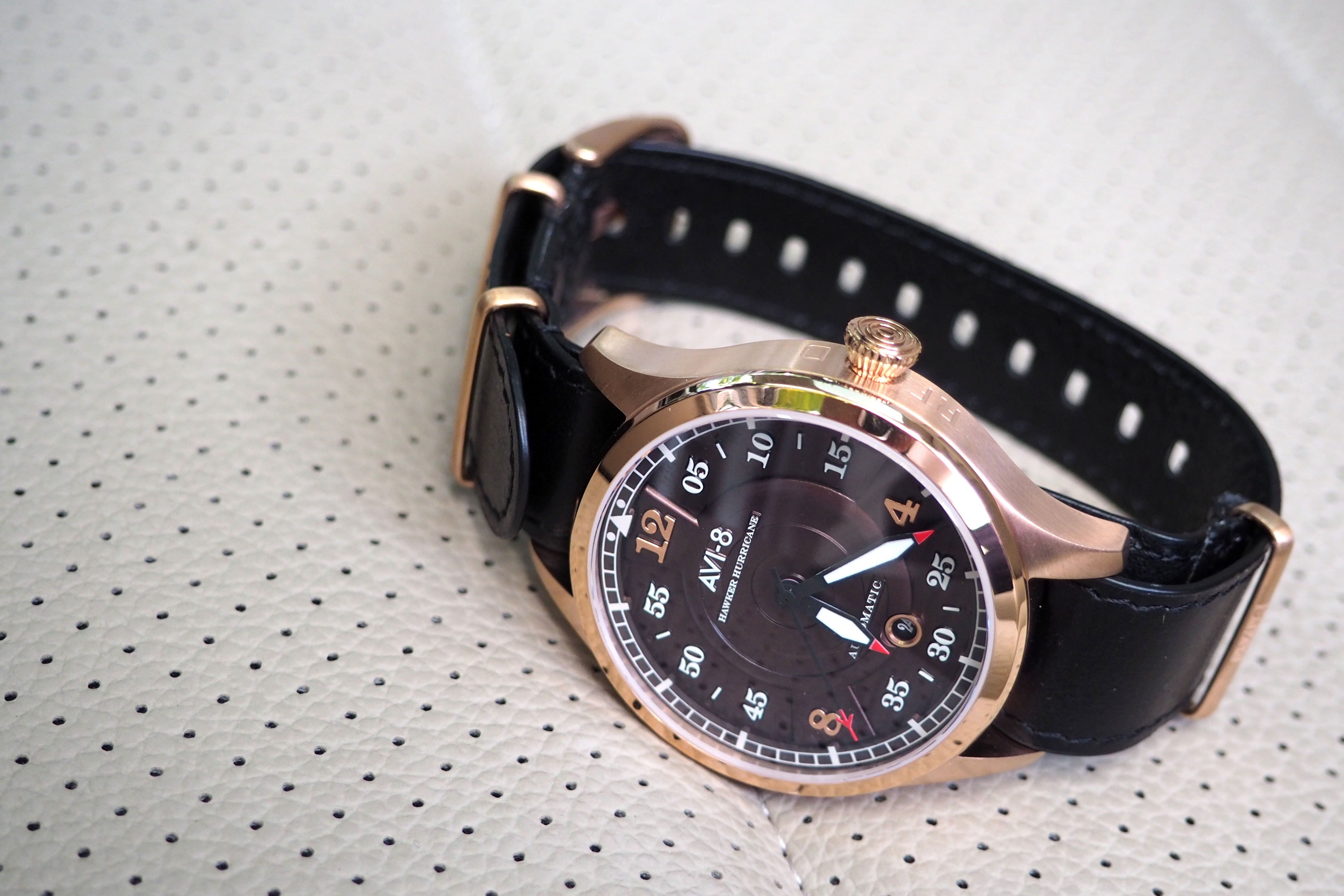 The watch has a water resistance of 5 ATM, but remember that this is an aviation watch, not a dive watch. If you need a timepiece to take snorkeling, there are better options out there.

The lug width on this Battle of Britain watch is 20 mm, which accommodates either of two NATO straps that come in the box: one canvas and one leather. The canvas strap is brown with an almost imperceptible bronze hue. The leather strap is black and embossed with the AVI-8 logo. Each has rose gold loops inscribed with the AVI-8 name. 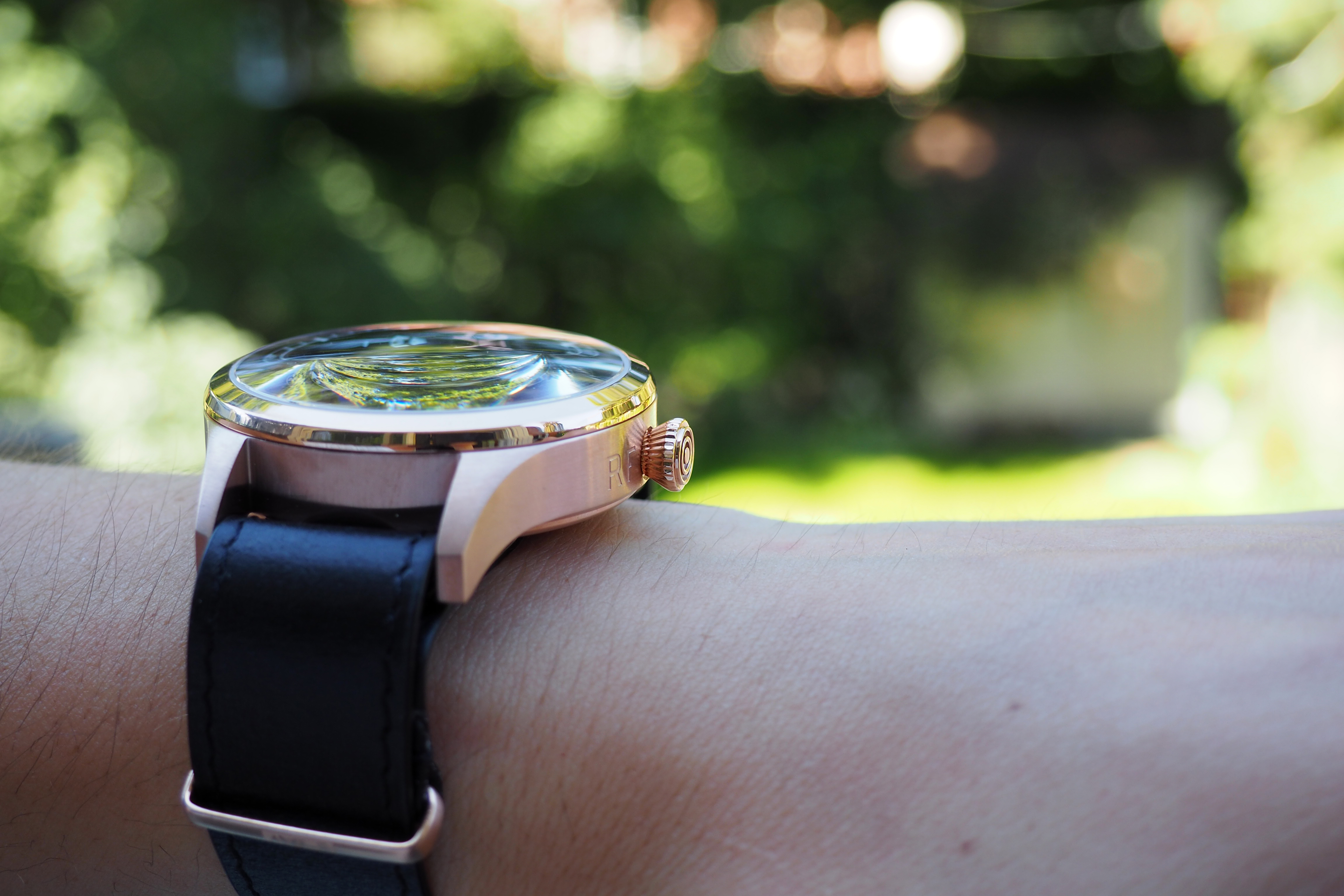 Both straps match well with the rose gold case, so you’ll probably end up choosing one or the other based on how it feels on your wrist. Because these are NATO straps, with an extra layer of material beneath the caseback, the watch will sit a bit higher on your wrist than normal. If you find that too much for you, you can always replace the NATO strap with any 20 mm strap.

Keeping the watch ticking is the Japanese Miyota 28215 automatic movement. It has 21 jewels and vibrates at 21,600 bph, so while it’s not the flashiest movement out there, it’s certainly a reliable workhorse that will keep accurate time. 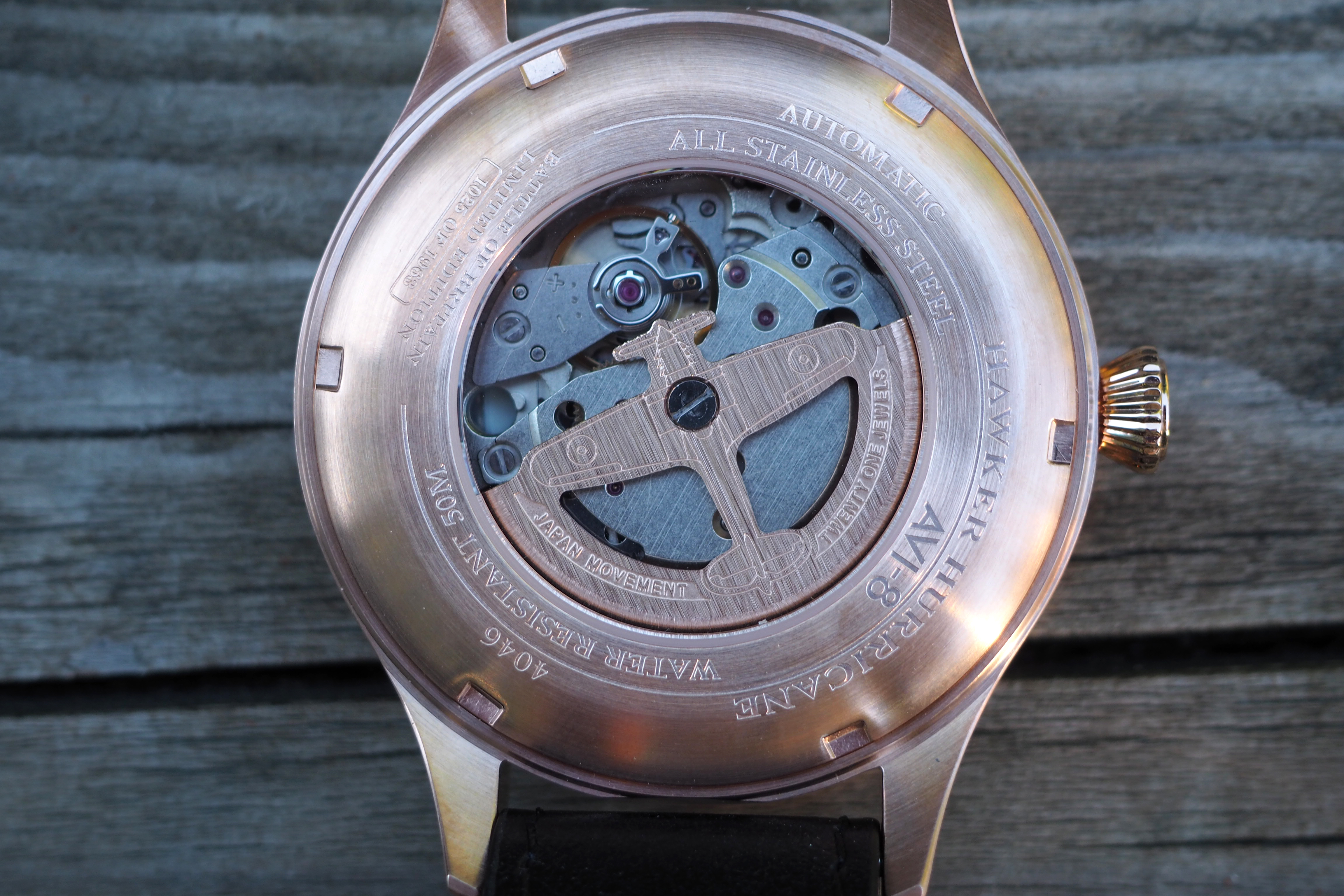 The caseback features a sapphire crystal exhibition window that gives you an excellent look at the movement and its most unique feature, the custom rotor shaped like a Hawker Hurricane fighter. The only drawback is that if you use the NATO strap, this window and all its exquisite detail will be covered up—but at least you’ll know it’s there.

The watch face is handsome and multilayered. The rich, coffee-like brown of the watch surface offsets the rose gold case and other accents around the dial. As with all AVI-8 watches, the dial is a combination of both obvious and subtle references to airplane components. 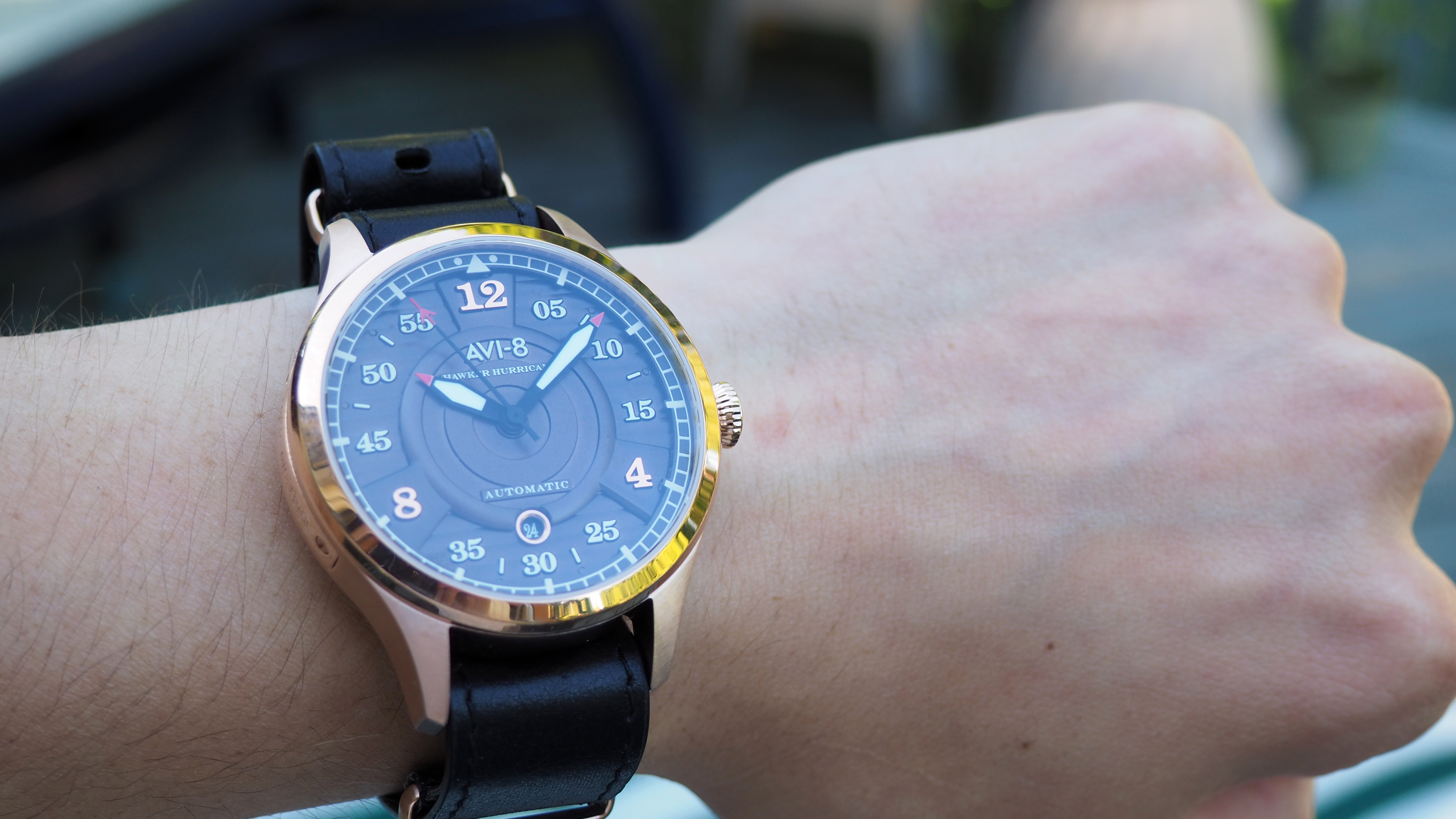 The concentric circles at the center of the dial are a nod to the iconic roundel of the RAF—the “logo” of the Royal Air Force, as it were, which would have been painted near the nose of the aircraft. The three raised arms jutting out from this circle have a distinctly turbine-like appearance, and the red-tipped minute and hour hands are an obvious stand-in for the propeller. 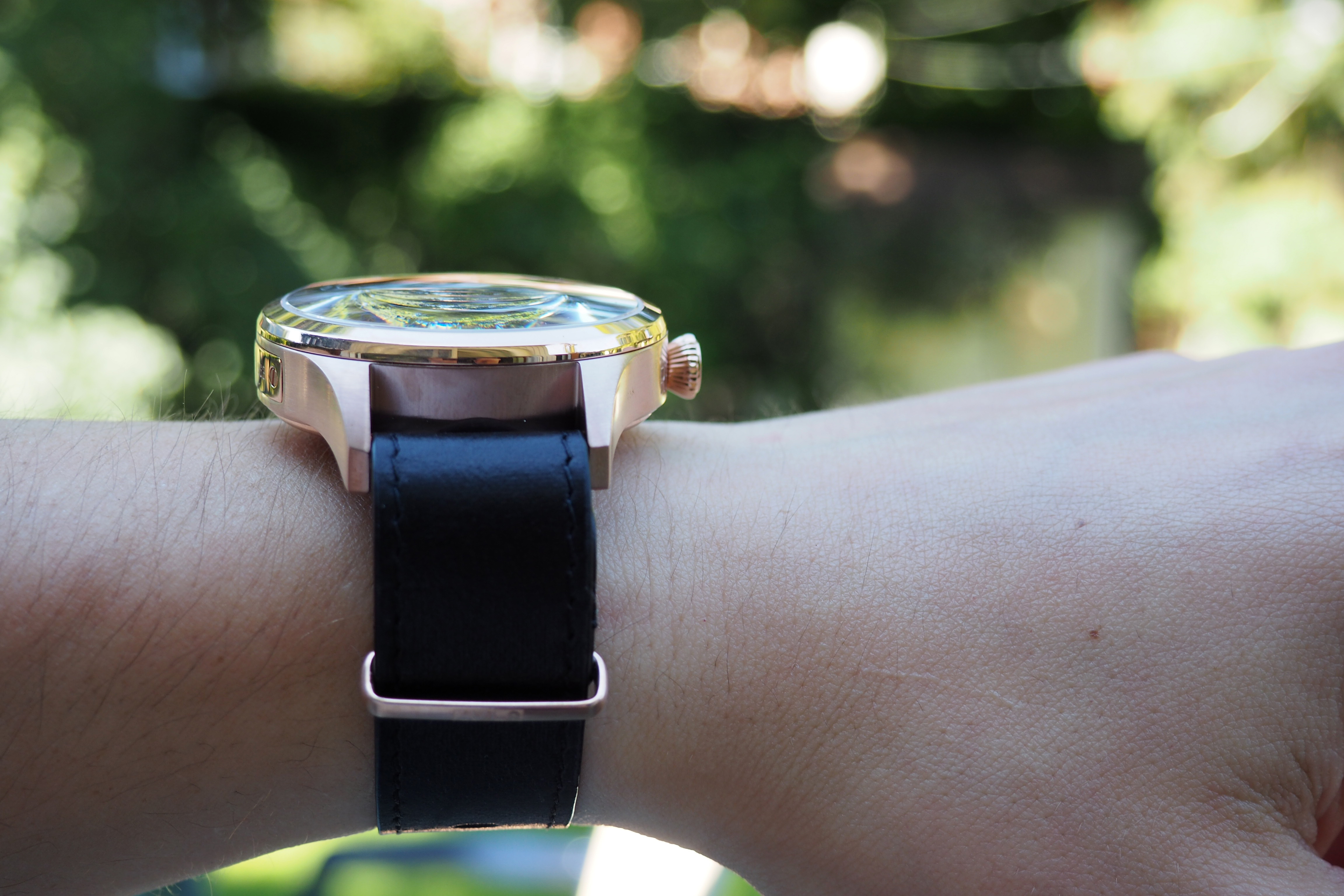 The hour markers—12, 4, and 8—are applied rose gold and larger than the other numerals on the dial. The remaining numerals mark five-minute intervals—these, too, are raised, but have more of a silver finish. The outer chapter ring, which sits a little above the rest, marks the individual minutes and has a triangular pip at twelve o’ clock.

The date window at six o’ clock is a neat detail: rather than the usual rectangle, AVI-8 has opted for a little rose-gold circle that displays a white number inside. It’s a small touch, but it shows the deliberation and care that went into a part of the watch that is rarely more than an afterthought.

As their name suggests, AVI-8 is in the business of aviation watches; that’s all they produce, so you have to decide if that’s really your style. If you appreciate the heft and unique characteristics of an aviation watch, then this might be a company for you to consider. 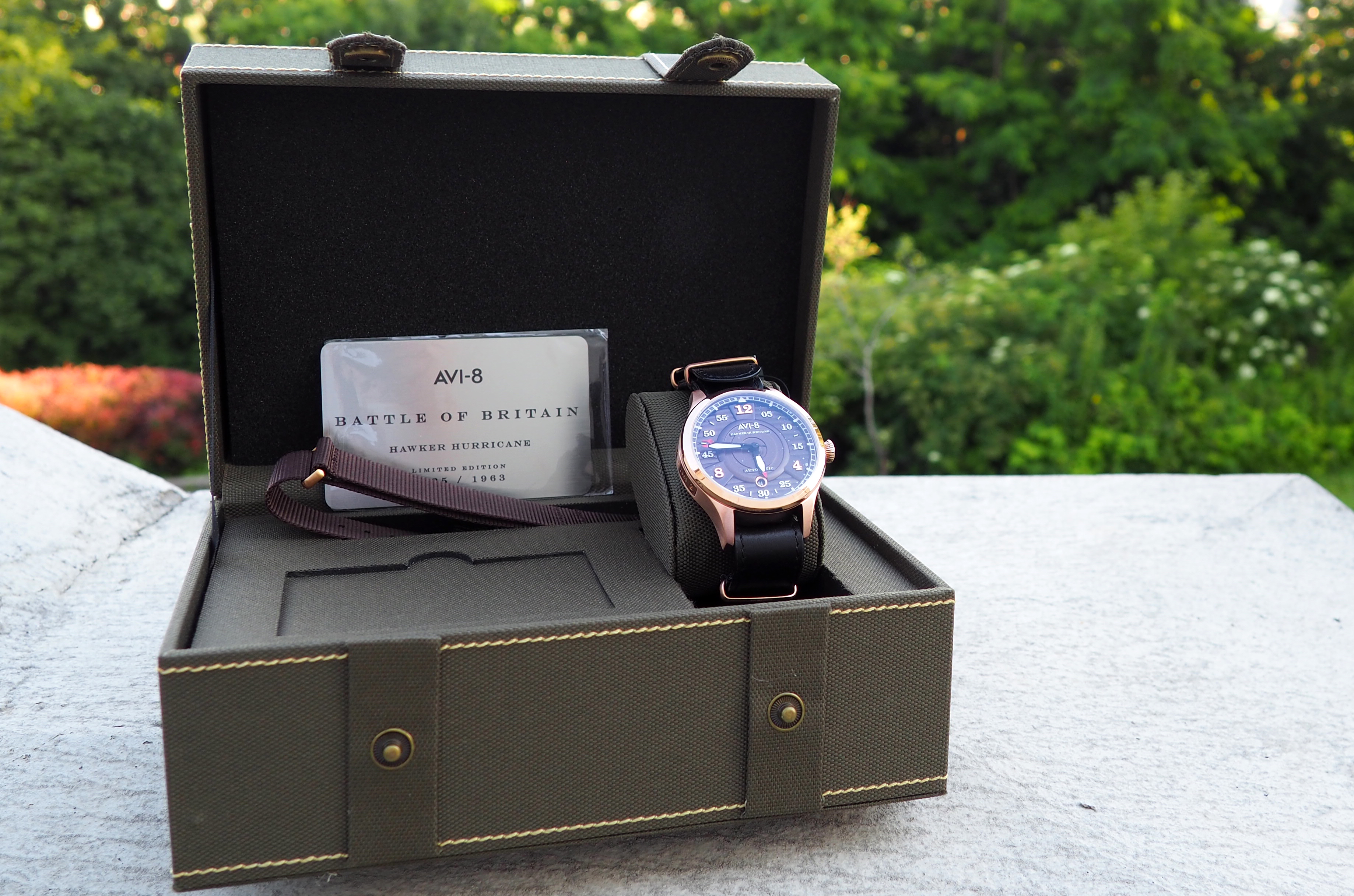 The AVI-8 Hawker Hurricane has seen several different iterations, but the AV-4046-02 brings a particular bit of history to life by honoring the legacy of the Battle of Britain. Meticulously crafted and produced in limited quantities, this AVI-8 offering is worth checking out.

To have a look at AVI-8’s full line of timepieces, visit their official website here.