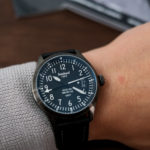 50 years ago, the Austrian Air Force purchased an order of Saab 105 fighter jets from Sweden. Often referred to as the “S 105”, the Saab 105 might seem like an obscure aircraft to an American audience, but it was a mainstay of the Swedish and Austrian air forces for decades. As a matter of […] 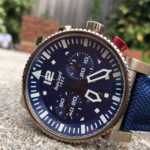 Every so often you stumble across a watch that turns you into a bit of a romantic. It’s got all kinds of bells and whistles that make you want to show it to all your non-watch enthusiast friends, in a likely vain attempt to convince them that your hobby isn’t weird and anachronistic.  It might […]

Hanhart has been known as a brand that specializes in creating well-built, robust and vintage-inspired chronographs. Moving away from the production of their classic collections like the Pioneer MonoControl, they decided to make a more modern watch. The PRIMUS Racer is a modern take on Hanhart’s manual stopwatches which have played a major role in […] 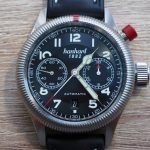 The Pioneer is a flashback to one of the very first mono-pusher chronographs that Hanhart gave us in the early part of the 20thCentury. Unlike most chronographs the Hanhart team decidedly reduced the clatter on this timepiece and went with a mono-pusher instead of the double button. This required some innovative redesign work and the […]